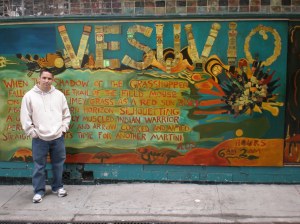 I was born in Erie, Pennsylvania in October of 1971 to José Otero and Christine Swartwood. My father was originally from Manatí, Puerto Rico and moved to Erie to work on the farms and grape fields in the surrounding areas. My mother was one of nine children and lived on a farm where my father worked. They began dating and eventually got married and moved to Puerto Rico.

Their marriage, however, would be short lived, lasting less than five years. After the divorce, my sister and I were raised by our mother and rarely saw our father. Our mother, who battled alcoholism throughout our childhood, and our father, who was largely absent from it, would come to play important roles in my development as a martial artist, teacher, and writer.

At twelve years of age, I began studying karate from a martial artist who moved next door. While it was never spoken of at the time, his struggles with his identity as a gay, black man living in western Pennsylvania led him to be somewhat reclusive and suspicious of others. As a young boy ashamed of my home life and unsure of my own identity, karate became a place where I could develop a sense of pride, yet distance myself from people.

After years of study, I became a black belt and eventually found myself teaching karate and opened my own school in November of 1993. I learned a lot about myself by teaching. Karate became more about discovering my own strengths and helping others to discover theirs and less about distancing myself from people.

My growth as a karate instructor led me, in part, to enter the English program at Mercyhurst College with plans of becoming an English teacher. During my studies at Mercyhurst, I was introduced to the poetry of Martín Espada. While I had a strong interest in poetry at the beginning of my studies, it wasn’t until I began reading his work that I felt my own stories were appropriate topics for poetry. With the encouragement of some of my professors, I began writing.

After earning my B.A., I taught eighth-grade English in a small town south of Erie. Although I enjoyed my time there, I left to pursue a graduate degree the following year. At Gannon, I continued to write poetry and based my master’s thesis on my own struggles with identity. “Puerto Rican Lost: An Exploration of Ethnic Identity” became a combination of literary analysis, memoir, and poetry.

Since then, I’ve gone on to teach English on the college level and am pursuing a PhD in English at Indiana University of Pennsylvania. I currently live in Salt Lake City, Utah and continue to practice karate, teach, and write.